We woke up both feeling unwell, it was a struggle to get out of bed. When we eventually made it to leave the Ryokan the manage ran out and said "Do you have umbrella", I did not so he said, "Today is very rainy here take these" and handed us too umbrellas what a nice fellow!

As it was raining we appreciated how many of the walkways in Koiwa (and Tokyo in general) are covered. Pretty sure they could not do this in the UK as they would be immediately vandalised.

We headed to Ginza, it turned out that museums are shut on Mondays so we decided to go shopping. The first stop was the Sony centre. The home of Sony has a whole building dedicated to the TV's stereos and other electronics produced by the Sony corporation. They had an amazing TV hooked unto blu ray looked stunning. I bought myself a pair of noise cancelling headphones in the hope that I'll be able to hear some music on the flight home.

Exiting Sony we walked around two buildings with restraints on the 42nd floor, then with a. viewing platform on the 46/47th flloor. There were spectacular views over the city. We decided to splash out and eat there, however we had missed lunch as it was 2pm so we decided to grab a drink and return later.

Ginza is one of the most expensive and exclusive shopping areas in the world. Think Kensington in London or The Champ-Elysees in Paris. There were a lot of awesome clothes. I had borrowed a bag from Ian but the zipper on it broke so I got myself a little "man-bag" to cart around my bits and pieces. It looks great in red leather. K found a wonderful top in the sale but decided it was still a bit too pricy so after a lot of thought put it back.

Dinner was held at the Oregon diner on the 41st floor sat next to the window looking out onto Tokyo below. The food was excellent, life doesn't get much better than this. 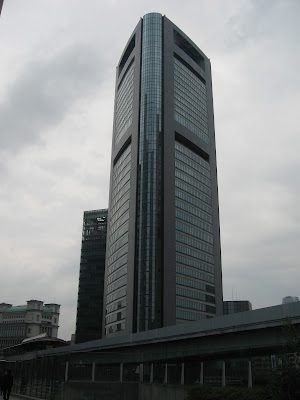 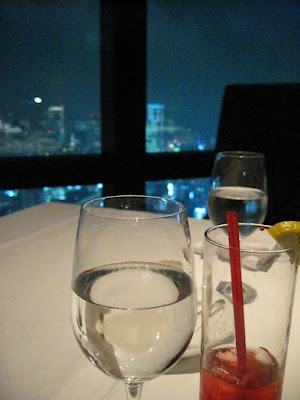 Posted by Cookiesworld at 11:00 pm