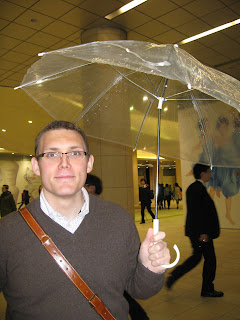 Rain and wind battered us from the moment we stepped out of the Ryokan. Today we had planned to go to Kanubura but the weather forbade this so instead we decided to go and see the bar from "Lost in translation" then head to a photographic museum.

Taking the tram to Shinjuku attempted a quick round of the shops (I still needed a coat) it was to windy even to use the umbrella mine nearly snapped when I tried.

Riding the Toca line we made the walk to the Park Hyatt hotel battling the wind and cold. The hotel is part of a commercial building occupying floors 37-52 with the bar and restaurant at the top. Taking the lift to the lobby we walked past the rather grand dining hall and lounge to another lift which went to the top restaurant bar "New York". Unfortunately at this point we were greeted by a rather zealous concierge who informed us that the bar would not be open until 5pm and no we were not allow to go see the view.

The nearest subway station was located in the opera house complex with some shops and restaurants. After all the battles with the elements and hotel staff were a little tired and hungry. Finding a nice looking Japanese restaurant in the basement. Unfortunately after having some language barriers ordering they gave us the food to take away. With the bad weather that posed a bit of an issue, as all the places outside were soaking. The inside space is all corporate and we weren't allowed to eat! After failing to find somewhere  to sit we headed to the museum defeated.

Located in a "Garden" complex near to where the Yebisu beer museum.  Finally we could grab a bite to eat. I had seafood noodles and Kasia grabbed a pizza. Unfortunately they had set an early closing time because of the weather so we only had 35 minutes to whip around. There was an exhibition of surrealist photographs including some famous artists including Man Ray and Andre Kertesz. It was a really good exhibition Kasia really enjoyed it being somewhat a fan of surrealist art. 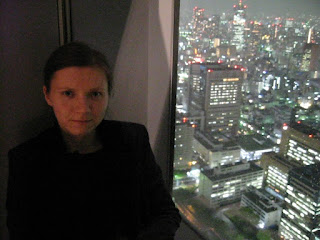 It had been a bit of a crappy day with the weather so to cheer ourselves up we headed back to Ginza up to the top of the Denska building which unlike the Hyatt don't mind about visitors who come for the view.

The wind (which at one point had been strong enough to stop at least one and delay several trains) had finally died down, the rain along with it. So we took the opportunity to walk from Ginza to Tokyo station. We stopped for a coffee en route just to people watch everybody in the Tokyo evening. You might think in a Starbucks you could be in any city of the world, but these scene was unruly Japanese.

Taking the train back to Koiwa we bought some drinks and had the food we bought earlier. It was actually pretty nice breaded chicken beansprouts rice and shrimp.

It had been an up and down day but we ended it on a high, happy. 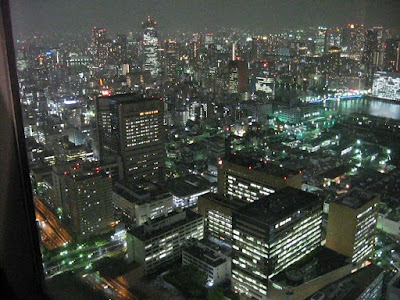 Posted by Cookiesworld at 10:30 pm