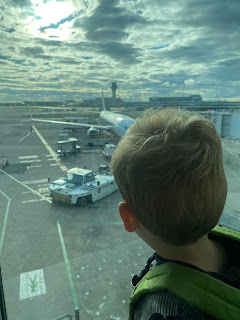 I now know what its like to be the parent of the child who is screaming on the aeroplane! Kath Thom and I headed from Manchester to Warsaw via Ryanair (I know but there aren’t many options from Manchester).  Thankfully the person next to us was very kind and was travelling with a group so spent most of his time further down the plane with his mates. They were off to watch a drifting competition.

Given that the flight was late around 40 minutes so we had already been queuing prior to that. Thom was actually a really good boy. It broke his normal routine but he only had one big cry mid way through the flight. I don’t think he liked being cooped up on Kath’s lap. It was our first flight in over two years and the first with Thom so we were a little on edge.

On arrival to Warsaw, we were met by Piotrek who generously offered us a lift to Bialystok. The drive is around 2.5 hours, and unfortunately it was extremely bad weather rain lashing down all the way in the dark. I am very glad I didn’t had to drive myself. Had we have had to take public transport it would have been much longer as we would have been forced to take the bus into Warsaw first then either take the train or another bus to Bialystok. 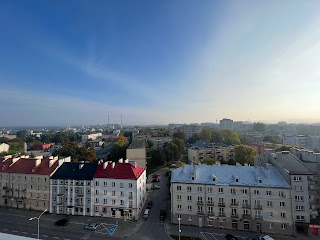 from singing to screaming to sleep. Kath had rented an apartment for us in the city centre a short walk to her old apartment which is now where her sister lives. It is on the top of the ten floor building so we have no upstairs neighbours and we get a pretty good view out of the balcony.

Today I met Karolina future husband Artur, we enjoyed a family meal together it was a really nice evening. Her brother and mum and dad were also present so we had a nice catchup over a burger and fries.

Posted by Cookiesworld at 9:00 pm