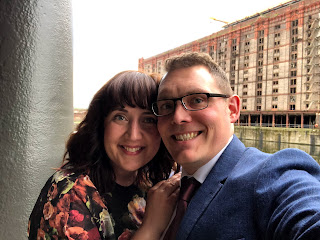 Friday was the wedding of Dan and Kate. The ceremony took place at Our Lady of Compassion Church in Formby near to Kates family home. It was a picturesque setting. Ian gave Dan a lift in his newly refurbished RS Turbo. He looked very dapper with the groomsmen.

The reception was at the Titanic hotel in Liverpool, there was a bus taking us back for to the church from there. The Titanic used to be a warehouse and has been rather tastefully converted to a spa hotel. Next door is a massive building which used to be a tobacco warehouse, its int he process of being converted into accommodation. I imagine they will be very smart apartments when completed.

The rooms in the titanic are huge. We took a standard room and it was huge, a large bed sofa and char. In fact the bathroom (which actually had a bath) was bigger than some hotels rooms I have stayed in!

The reception itself was held in a room off the hotel lobby and bar area. Dinner was lovely, was had salmon pate to start then chicken with a rather generous helping pudding, lovely!It was really nicely decked out with themed tables. Kath and I were sat with Nina, and some of Dan's family. Bruce unfortunately could not make it thanks to tonsillitis. We had a great evening catching up with various people. Paul and Saskia were there with Phoebe in toe. Joe came along as did Ian, Helen and Nick and Charlotte. Everyone seem to be on top form.

After some dancing, chatting eating and enjoyment, including a guy drawing caricatures. We enjoyed many drinks at the rum bar. They make a mean old fashioned. We had a nice sleep the bed was comfortable and the room was dark. 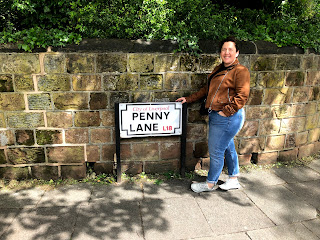 Saturday Kath and I had planned to go to parkrun but the cocktails put paid to that idea so instead after a relaxed breakfast (they had an omelette chef!) we headed to Liverpool to see some of the sites, then for a walk around Speke hall. Overall a lovely weekend catching up with friends and celebrating Dan and Kate.
Posted by Cookiesworld at 7:34 pm