Thursday in Gdynia, we awoke late head still buzzing from the Radiohead set, setting out to grab breakfast from Trafik we ate lazily and anticipated seeing the Foo Fighters later today. 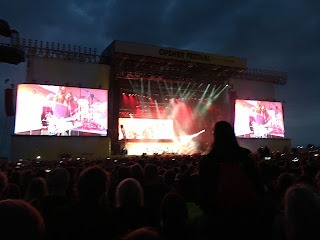 Feeling quite tired we had a lazy afternoon, taking the funicular to Kamienna Góra. There is a great view out of the city and out to the sea.

We headed out to the festival in time to watch the start of Jimmy eat world at the tent stage, before heading to the main stage to catch the Kills, then back to the tent stage to catch a bit of MIA. I can't say I enjoyed MIA it seemed to me she turned up the base to cover the fact she couldn't sing. We left before she made her announcement that she had deleted her twitter account. All before Foo Fighters. 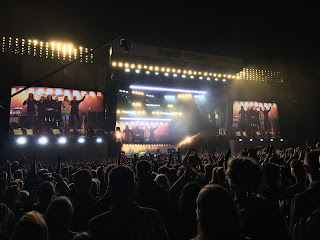 Foo fighters were incredible, this is the forth time I have seen them and they never disappoint. We managed to get a lot further forward than at Radiohead. Their set was really nice with fan favorites including the Pretender and Monkey wrench. Dave Grohl even did a solo from their new album with the Kills front women Alison Mossheart. Titled 'La Dee Da' Grol and Mossheart shared the mike to sing the chorus.

Grohl gave it everything but by the last couple of songs his voice was going, he joked that Radiohead had played a 6 hour set but he didn't have time for that!
Posted by Cookiesworld at 2:30 pm