What a time we are having, from the grief of the Manchester bombing to a concert of defiance and refusal to give in to terror. Kath and I spent the evening watching Ariana Grande One Manchester concert. Even with last nights London terror attacks the concert was very well done showing a spirit of defiance. The highlight for me was watching Liam Gallagher singing live forever with Chris Martin. It was also amazing to watch the people enjoying themselves not letting terrorists dictate the terms to us. 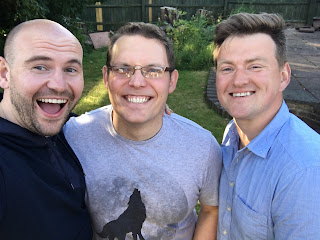 On Saturday Kath and I had a BBQ / housewarming. The whole gang came round, including Dannys' new significant other the lovely Kate.  I also got a chance to meet some of Kaths colleges from Chester which was really nice. Patrick and Rhiannon were lovely it was great that they made the trip.

I spent most of my time grilling various meat and non meat alternatives on the bbq, while enjoyed a few tins of becks veir. The weather report predicted rain so Ian lent us his gazebo, but we managed to get sun most of the day with only a short shower.
Posted by Cookiesworld at 11:30 pm