Don't look back in anger

Yesterday I took part in the Great Manchester Run 2017. The first time they ran a half marathon. After the bombing at the Manchester Arena earlier in the week I wasn't sure what the atmosphere would be like.

I need not have worried, what an amazing community we live in. The half marathon started at 9am, there were already people lining the route to cheer the runners on. Before setting of we had a minutes silence followed by them playing Oasis dont look back in anger. It was a poignant moment. The run itself took us past both the City of Manchester and Old Trafford Stadiums. It was quite strange to run over the Mancunian way.

After the run I headed to St Anne's square to pay my respects and look at the tributes laid there. It was simply incredible, a sea of flowers, balloons messages, its was humbling to see. 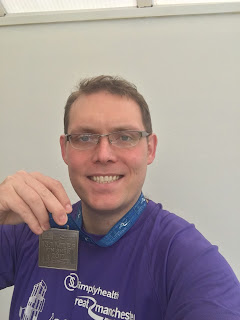 My final time was 1:58:38 which was a little slower than I hoped for, my legs got really tired around the 12 mile mark. That didn't detract from what was an amazing day.

In the evening we had a visit from Esther and Kimberly, they had come to Manchester for a spot of shopping. Kimberly is planning to buy a house in south shields, it looks like a good buy we hope that she get it.

Posted by Cookiesworld at 9:50 am

Email ThisBlogThis!Share to TwitterShare to FacebookShare to Pinterest
Labels: running