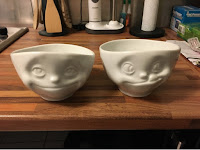 This weekend Anya and Silvio visited us. It was a bit of a whirlwind trip they arrived on Friday night after travelling up from Cambridge. Unfortunately Kath was working and unable to switch shifts. They both arrived late so we got a take out curry from Ayo Gurkali.

They bought us an amazing gift of two Tassen bowls with faces, I already enjoyed eating my cereal out of them.

Saturday Kath was still working, I took Anya and Silvio on a tour of Manchester. We took the train to Piccadilly then walked into town. Starting on Dale Street at the Nexus At cafe before waling round the triangle then to the Cathedral. From there Kind street via St Annes Square  to the Town hall. Lunching in the Waterhouse before heading to Chinatown to see the Arch then on to the Museum of Science and Industry. We went to view the exhibition on Cravings. I found it quite interesting, it reinforced some of the things I saw on Trust me I am a Doctor. Basically gut microbes have a huge effect of digestion, and ultimately on health. One really interesting gadget was a digital device which was able to stimulate different tastes an flavours by using electrodes on applied to the tongue. Imagine this together with one of the virtual reality systems you could really be immersed in a virtual world, I hope this wont result in the Matrix scenario!

It was really nice to have Silvo and Anya over, it has been to long since we last met at Pauls stag do in Berlin. Hopefully it won't be so long until the next time we meet up. 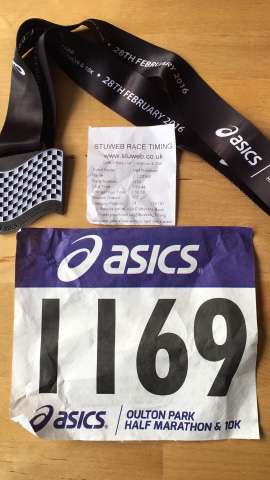 Today I had the Oulton Park half marathon. Six laps of the race track got a little monotonous by lap 6 I was glad to finish, even if my time was a little of my best pace set in Glasgow. This time though my training is more about distance than pace so unsurprising that the speed was lower. I really liked the medal though, in the shape of a chequered flag.

Posted by Cookiesworld at 7:53 pm