Its been a crazy week. Last weekend Kath was here, we had an amazing time together. Friday night we had a cuddly evening with Fish and chips from the new chips shop in Handforth. They were very tasty. Amusingly as we walked back with dinner, there was a gaggle of young girls outside my neighbours house having a party. We decided not to join them, and went inside to devour our dinner and enjoy a few beers cuddled up on the sofa. 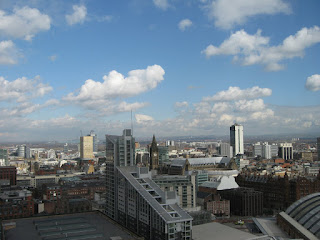 On Saturday Kath and I headed into Manchester. We had a ticket for Afternoon tea at Cloud 23 bar in the Hilton Hotel. The views are pretty spectacular, and the tea and cake were very tasty. Some photos here After the tea we wondered into Manchester to do some shopping. I got myself some new trainers, and Kath got some things from Primark. We had dinner in Chiquito, then met up with Phil and Caroline for a drink.
We took the train back to Handforth and had a beer in the Railway before meeting up with Bruce for a drink in the renovated Bulls Head.
On Monday I had the day off and we went to visit Dunham Massey. A National trust property, we walked around the grounds. In an effort to find a place to park were I didn't have to pay £5 I managed to stupidly hurt my back. So I was slightly hobbling around. It was a nice walk though, the day was beautiful Spring had arrived, cherry blossoms have come out. We saw lots of deer running around. Heading into Altrincham for lunch at the Slug and Lettuce slightly spoiled by the young women on the next table who was having an argument with her dad. Moaning about the unfairness of the world. I resisted the temptation to slap her and have a rant about her!
Tuesday Kath went home, I was very sad to say goodbye, it seems to get harder everytime.
Wednesday I met up with my previous work colleagues for a sort of goodbye meal. It was a very pleasant evening at the bulls head.
Thursday I had a random message from Paul to tell me that he was coming up to see Ian. I met him Danny Jo Berger and Woller at TGI Friday at the Trafford Centre. Was really good to catch up with everyone. Having chat about what we have been upto. Jo bought Ian a wonderful book full of breasts which will make an interesting coffee table material. Wonder how Nicks' Char will think about that on the coffee table?
Posted by Cookiesworld at 9:12 pm