I have been quiet for some time, so I decided it was about time I updated where I am.

First piece of news is after 6 years working at my current company I have decided to move on. I have accepted a new position as a support developer at a company based in Northwich. It was a hard decision to make however I am pretty excited to work on something new. I will be supporting and developing a new portal.

As part of the move I will lose my current mobile phone, which is provided by my current employer. I had long wanted to get an IPhone but after two failed attempts at buying one I decided to go down a different route. I got myself a Samsung Nexus S. It is an Android phone and so far I must say I am very impressed. Its very responsive and does multi tasking really well. I was talking to Kath on Skype while composing an email an attaching a picture of Cocoa 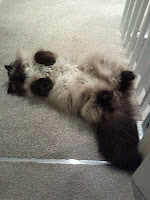 My old phone is a Blackberry Storm and while I briefly had an Apple Iphone 3G to play with the Storm is the phone I draw most of my comparisons from. The Camera is much better than on my Blackberry Storm. Also much better than the Storm is the haptic feedback. The Storm uses something called "Sure Type", where you actually depress the screen. It was an attempt to give your fingers some feedback for people missing keys which depress; I believe that Blackberry have dumped this on the Torch. The sure touch thing is good for new users but actually slows typing plus over time bits of the screen don't depress so well. The Nexus has feedback in that it vibrates as you hit the navigation keys or when they are locked. The screen is a lot larger, brighter and more sensitive to the touch.

One interesting factoid is while the Storm you can hold it in any direction in landscape mode. Android definitely has a top and bottom, both in portrait and landscape mode.

The Storm was dreadful for applications. It small memory and the General lack of decent applications meant I basically only had a couple. In a couple of days of having an Android phone I am swimming in them. I can edit photo on my phone, use the GPS, call Kath on Skype (please can you add video calling Skype?), and play angry birds! I am missing some applications that are Apple only, like Speed test, though given how many Android users there are I think most applications will end up with a Android version

Most people say I am crazy but I kind of miss using ITunes for music syncing. It acts as a mass storage device I can simply drag music into the music folder.

Overall so far I am very impressed with Android, and not missing the the Blackberry one bit!
Posted by Cookiesworld at 4:13 pm