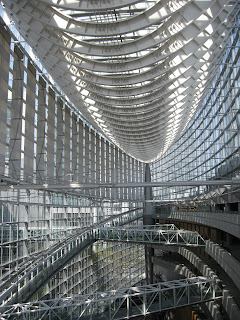 We woke up late after forgetting to set the alarm. I'd slept for 14 hours which is the longest I have slept in years, at least it cleared my jet lag headache.

We attempted to visit the Imperial Palace again, but while walking from the metro we noticed the international forum.

An amazing building in steel and glass, rising majestically from the street. The design is an oval shape with a huge expanse of atrium surrounded by a walkway rising around the edge.

We made it to the gardens at 3pm and there were closing at 4pm, there is a 45 minute stroll to the entrance so we gave up on the palace and instead headed to Asakusa.

Our tickets were only for the railway not the subway so we had a long walk from the garden to the station then from the Ueno station to Asakusa. It was a pleasant stroll though, Asakusa is a bit less full on that Shinjuko. There were a lot of nice shops and restaurants. We stopped for dinner in one of the Japanese restaurants. I had the breaded squid and green tea. It was another point and choose affair.

After the dinner we wondered around and found a shrine. Like the Baddest shrines in Shanghai outside there was a large market. Kasia bought a fortune cokie, she will have good fortune. The light was failing and it was getting chilly so we headed back tot eh train station and Koiwa. We sat in the Ryokan chatting and enjoying the evening.

Posted by Cookiesworld at 10:30 pm