We arrived in Tokyo. Wow that was a long flight, I managed to have a sleep and watch 2 films, Kite Runner and I am Legend. We nearly fell asleep on the train out to Koiwa where our traditional Ryokan was located.

It's quite overwhelming getting across Tokyo for a Westerner, its so colourful and bright. The scene from Lost in Transalation is about right the senses are assaulted, the sights the sounds and smells.

The Ryokan Fugi is a small lodging house with a. traditional Japanese room, and bath.

We managed to have a round of the Cherry Blossom in Ueno it was late in the day but it was very beautiful. Many people were picnicking under the trees enjoying the outside. 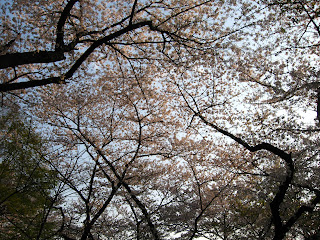 Posted by Cookiesworld at 10:00 am