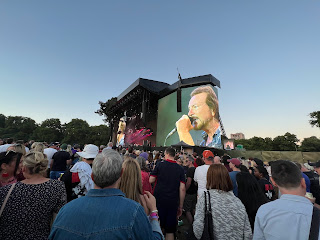 A long time ago, before Thom and pre covid 19 I booked tickets to see Pearl Jam in Hyde park. After several re-scheduallings Kath and I finally got the change to go to the gig. Pearl Jam produced one of my favourite albums and I have always wanted to see them live.

Nina and Bruce stepped in to take care of Thom overnight, so Kath and I could have a free time at the gig. We took the train and checked into the Pullman Hotel in St Pancras in time for lunch. We ate in the restaurant which was super cool but with a price tag to match. Overall I couldn’t recommend it for the food, but not bad for a cocktail in style. 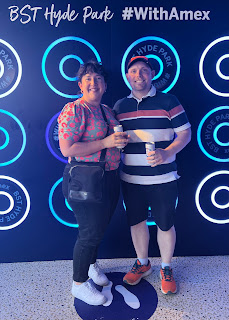 After lunch and a quick change we headed out to Hyde Park to British summer time event. We arrived in time to grab a beer and catch Jonny Marr. The event was sponsored by American Express and they had a special setup where we picked up a free water bottle and tote. The weather was amazing, really sunny and warm, so the water was a good touch.

Next up was Stereophonics, they were the first band I saw live way back in 1999. They were really good and I enjoyed it very much.

We had a posh had a posh hamburger and celebrated being child free and out on a night out for the first time in months with a bottle of Moët. Kath also queued up and bought me a tour t shirt, very cool. Next up it was time for the main event. The set was amazing all my favourites and great banter. It must have been hot on the Great Oak stage with the full sun beaming in, I bet that they were glad when the sun set.

There were times during the set where I was back to being a teenager listening to ten again, or Vs. It felt really good.

The tube was super busy on the return, we were lucky to get on. When were arrived back at the hotel from the 11 floor we had the most amazing view over the city. 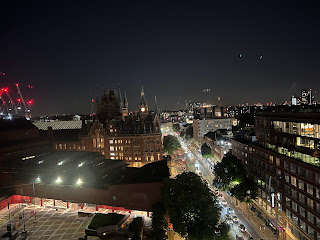 We woke up early the next day so checked out and got the train back to Wilmslow. We took Bruce and Nina out for lunch to thank them for looking after Thom. He seemed in great spirits. I think he had enjoyed seeing Connie too.

Posted by Cookiesworld at 9:18 pm

Older Post Home
Subscribe to: Post Comments (Atom)
'The views expressed on this website/blog are mine alone and do not purport to reflect the views of my employer'.