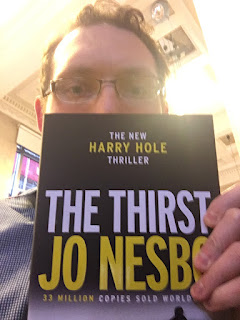 This evening I took the opportunity to see Jo Nesbo speak. He was launching his new book the thirst. Along with Waterstones he had arranged a talk, Q&A and book signing in Liverpool at oh me oh my. The latest book the thirst is the 11th instalment of Nesbos' work following detective Harry Hole.

Battling traffic I arrived just in time to catch the start. Jo told us the correct way to pronounce both his own name and Harry Hole (apparently it is Harry HOO-LEH). When writing the first Harry Hole book the Bat, (which is set not in Oslo but in Sydney Australia) Nesbo deliberately chose a name that would be mispronounced in English, as a sort of in joke for hte Norwegian readers. At the time he had no idea the Harry would be around for 11 volumes most of which are set in Oslo. He than talk about writing. It was interesting to learn that when he re-read the books he can see thing that were going on in his own life that perhaps he didn't connect at the time. Also interesting to find that his father fought on the German side during the war and this memory influenced the Redbreast.

I think I was almost last in the queue to get my book signed, I asked Jo if he got cramp signing so many but he is a seasoned pro.

I think that the last time I went to a talk by an author was when Martina invited me to go and see Cormac McCarthy. That was thanks to Simply Books in Bramhall, I think all the way back in 2008? Seems like a lifetime ago.

Now off to start reading, so excited to find out what is next for Harry Hole :) 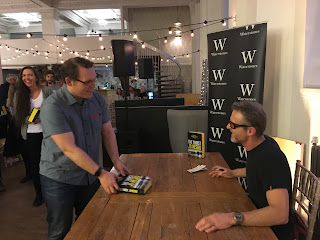 Posted by Cookiesworld at 11:16 pm