It was Danny's 30th birthday party yesterday evening. Held at Danny's local the Foresters Arms in Romiley (aka the piggy).
It all started at 2.30, however it involved watching Football which didn't interest me too much, so I headed down arriving about 6pm.
Using to the GMPTE journey planner to plan I took at train to Stockport then a bus to the centre of Romiley, then walked up the hill to the Piggy. 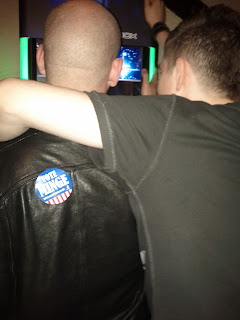 Holly, Jo, Woller and Paul were already there when I arrived, sat outside in the beer garden. Danny looked happy surrounded by friends, dressed in a dark side of the moon t shirt and a leather jacket.
Paul, started telling me about his trip to Australia, and proposal to Saskia.

Danny had arranged a Pub Golf tournament. I had heard of pub golf before but never played it before. It basically involves drinking a series of drinks, each drink has a par. The par indicates how many swigs it should take to drink. A pint was par 4 meaning it should be drunk in 4 swigs, consuming in 3 would score a birdie, two an eagle. There is a time limit on how long it takes to drink and some other rules which I forgot. I took Paul's place after he backed out I was teamed up ith Berger and two of Dans friends Abby and I think Becky. After the first hole and given most of the participants had been drinking most of the day already the competition descended into Chaos. Dan lost and won a shirt signed by his friends. There was a buffet following the golf, and a live band. 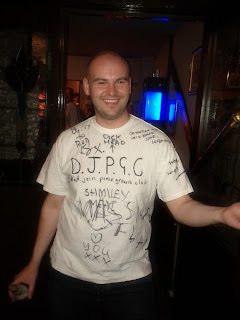 I sat and eat with the follow competitors, Paul and Holly. The band were good but it was very stuffy inside, so we headed back out to the beer garden. We tried to mingle, and I was chatting to Woller, Paul and Joe for a while though by now the effects of the golf had started to scramble my brain.

I took some not photos with my phone there are on facebook.

Holly was kind enough to offer me a lift home which was great, head feels a little sore this morning though.
Posted by Cookiesworld at 10:54 am