My dad picked me up bright and early, at 5am. I was feeling somewhat sleepy and a little achy after spending the previous day helping my parents re-roof their shed.

Everything was on time and a few hours later I walked out at arrivals to find Kath mesmerised by a pet raccoon who was waiting with its owners for someone arriving. 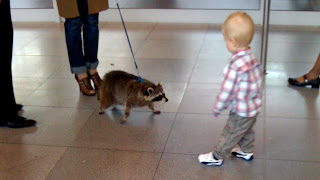 We had a coffee and a sandwich then headed to the bus station. Kath warned me that is was a pretty awful station and while she wasn't wrong. I looked like something out of a 70's era Soviet station. It stank, and looked more like Stalag 17. What was more interesting was part of the station includes a hostel. It looked more like a horror film, next to the bus station and railway lines, grey, ugly and dirty.

Fortunately I had Kath to keep me company. I was a bit afraid that we would end up on  one of the 70s era bus, fortunately ours was a more modern variety.

Our eventual destination was Gąbin, a small city where Kath's parents live. Easter is a big thing in Poland so Kath and I were to join them for a few days. I had never met Kath's dad before and am unused to big family gatherings so was a little apprehensive.

We arrived in the late afternoon, the weather was beautiful. Met up with Kath's mum Wanda, sister Karolina, brother Wojtek and dad Marek. It was a little overwhelming at first, so Kath and I went for a walk in the forest. Luckily they all speak English so I wasn't totally at sea.

After the walk we sat down to a traditional post Easter meal. There was no meat on Easter Saturday so the meal had lots of herring, and salad. It was tasty and different for me.

After the meal we had  a gin and tonic and some Lithuanian Vodka in celebration of Wojtek's names day. Polish celebrate both birthdays and names day. It was very nice family time.
Posted by Cookiesworld at 11:54 pm