Christmas Day I went round to my parents. I decided to walk, it was quiet refreshing in the snow and cold. 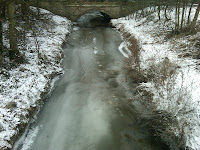 The walk takes about 50 minutes though there is the rather steep climb of Deanwater hill at the end. I as I crossed the bridge over the river Bollin, looking down the River was frozen over. I had never seen it Freeze before, but such has been the cold snap this year it was.

My parents did the full works of turkey, roast potatoes, roast parsnips home made chestnut stuffing, pigs in blankets, home made gravy, all very tasty.

After dinner I sat and watched TV with Storm, resting my rather overfull belly. I watch Casablanca a black and white classic. It is actually a very good film with some incredible characters and lines.

After that I headed home, had a few beers and watched from Paris with love. An enjoyable action film with John Travolta as an asskicking secret agent. Normally this is not the sort of film I would enjoy but as a brain off enjoyable film that didn't take itself too seriously.
Posted by Cookiesworld at 12:50 pm

Email ThisBlogThis!Share to TwitterShare to FacebookShare to Pinterest
Labels: Christmas