If you say the word 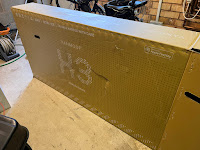 On Thursday I finally received the bike I had ordered back in September. I rather large box arrived containing my brand new VanMoof X3 electric bike. The X3 packs a 503w battery with a claimed range around 30 miles.

I bought this on cyclescheme a government backed scheme while enables you to purchase a bike via your employer. The payments are made over 12 months and are taken out of your pre tax income so you save paying the tax on them. 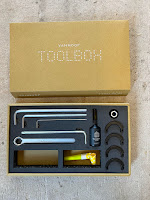 Before I was able to take it for a test spin I have to assemble a few items. Fortunately all the tools required come bundled in a neat little kit with he bike. The kit also includes a pump to inflate the chunky tyres.

The X3 is designed to be low maintenance, it uses hub gears which are covered from the elements. The chain has a good guard over it and the wheels are fitted with mudguards. It's all nicely engineered in a way to maintain pleasing aesthetics. 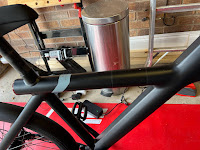 The electronics and battery are all build into the frame. This helps the bike look quite normal, however it does mean that the battery can't be removed to charge you have to plug the bike in. This isn't an issue for me as I have a garage with power but for some might be a deal breaker. 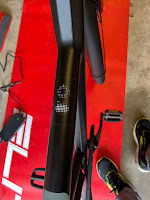 On the top of a the tube is a very basic matrix display which displays some status information  including the current speed while riding.

There is an inbuilt lock which with a tap locks the motor and activates at alarm. Anybody who attempts to interfere with the bike will be treated to a very loud alarm. There is an inbuilt modem and sim card allowing the bike to phone home with its location. I believe this is used by the bike detectives to track down stolen bikes. The X3 is also able to be registered in with Apples find me so you can view the location of the bike from your phone. There is also a manual method to unlock the bike tapping in a code if you phone is out of charge.

The Bike is controlled by an app on you phone, this controls some of the gear settings, the chime of the bell and records speed distance and assistance of rides. One thing I would have really like to see is some integration with Apple Health. While you are getting assistance you still have to pedal so some calories are being used!

I popped to the postoffice using the boost assist to ride up the steep Cow Lane in Wilmslow. This is exactly what I bought the bike for, I was able to quickly pop to the town centre and back at least as quickly as if I had used the car. It only used about 8% of the battery on using full assistance and boost up a steep hill so can make plenty of trips before needed a recharge. 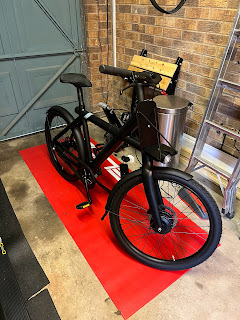 Overall so far very impressed will write up a more long term review once I have used it a few more times. 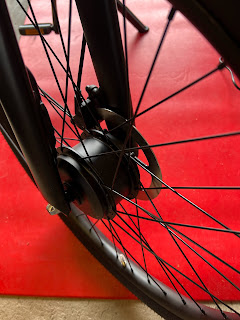 Posted by Cookiesworld at 12:00 pm